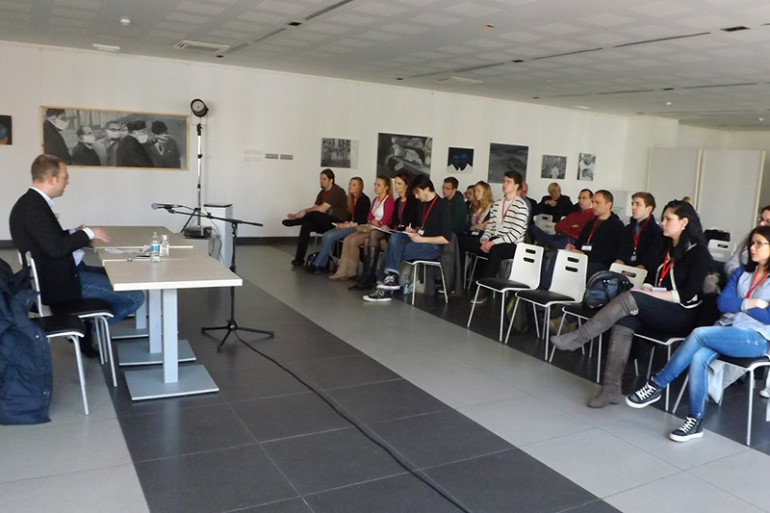 The second day of the seminar, April 2nd the lectures begin with the theme named - Security and Foreign Affairs in the Danube region, where participants had the opportunity to learn about security issues, as well as possibilities for developing regional cooperation between the countries in the Danube region.

During the second day of the seminar, two panel discussions were held. The panelists were government officials, representatives of national and international institutions and private companies.

Panel with the theme "Science, Education and Culture in the Danube Region" was held on April 2nd 2015. at the Cultural Center of Novi Sad, starting at 11 am. The panelists highlighted the many opportunities for the development of young scientists, and cultural characteristics of the Danube region. Director of the Cultural Center welcomed the Provincial Secretary for Science and Technology, representatives of the research station Petnica, as well as representatives of the University of Novi Sad, and discussed the current situation and possibilities for the future development of the academic community. In addition, the seminar participants were provided with information on the cultural identity of our country, which woul enable them, through a comparative analysis, to recognize the similarities and differences of the cultural characteristics of countries in the Danube region. Through the presentations of relevant speakers, participants had the opportunity to develop their knowledge of cultural capacities of our country, and to obtain answers through coordinated discussions. The speakers, who are selected to participate in this discussion, are experts in their fields and are competent to present the results of their intellectual and professional commitment.

Panel entitled "Economic and economic potential of the Danube Region" was held on Thursday at The Regional Chamber of Commerce of Vojvodina. The representative of the Regional Chamber of Commerce of Vojvodina, Mr. Milan Stojanov, joined the Provincial Secretary for Regional Cooperation and Local Government Mr. Branislav Bugarski, Mr. Peter Langer, who is representing the city of Ulm and a representative of Novi Sad, member of the City Council for Economy, Mr. Goran Sečujski. The panelists discussed the economic disparities in the region, in order to overcome the differences between developed and underdeveloped countries of the region and the possible forms of cooperation. The speakers described the challenges of regional economy and possible ways to achieve economic progress that the region aims to reach. Participants had the opportunity to hear experiences from practice and examples given by the panelists.

This is followed by a lecture about the History of the Danube region, which was held by a professor from the Faculty of Philosophy, Dr. Zoltan Đere. Profosor Đere, who presented information on the flows of the region's history, the historical legacies of the Habsburg monarchy and their influence on the development of cultural and historical identity of the region. As it is well known, the Habsburg monarchy has given a significant impact on the history of Europe, and has left an indelible mark on its map. The influence of the Habsburg monarchy was not evident only in the political sense, but also in art, demographic, anthropological, ethnological, architectural heritage. During this lecture, we had the opportunity to learn some unknown facts about these important historical actors.

The intercultural evening, which was organized later that day, contribute to the exchange of experiences between participants through the presentation of the countries of the Danube region, their traditions and culture, with the aim of better understanding of the similarities and differences in the Danube region.

Within the "Danube international seminar", which was held from April 1st until April 4th in Novi Sad, at the Cultural Center of Novi Sad, a panel discussion named "Culture, Education and Science in the Danube Region" was held. The panel speakers were Dragica Koldžin from the Provincial Secretariat of Science and Technology, Director of the Historical Archives of Novi Sad Petar Đurđev, Director of the Fund "Petnica" for the development of scientific education Mr. Nikola Bozic and the Director of the Cultural Center Dr. Andrej Fajgelj. The participants who attended the four-day seminars are graduate students from Austria, Germany, Croatian, Bosnia and Herzegovina, Hungary and Serbia, and through the discussions they found out more about culture, education and science in our country, and why these things are important to society as a whole.

Dragica Koldžin said that the Novi Sad University consists of 14 faculties some of which are in Subotica, Zrenjanin and Sombor. As she pointed out, Novi Sad has a very nice student campus, which includes almost all faculties, where nearly four thousand professors are working, and some of them are foreigners.

University of Novi Sad has a coordinating role in the seventh priority area of the Danube Strategy, and our plan, within the framework of the strategy was to recognize the capacities of all countries in the Danube region, in order to define and measure our capacity in relation to others. We had an idea to make a special effort to develop specialized strategies in the region and in our country, and to encourage "brain circulation" - the exchange of students and professors-added Koldžin.

She said she was very aware of the problem of "brain drain", and that they are trying to prevent it, motivating individuals by providing scholarships, such as the program "First Chance" which allows young people to work on various projects. In addition, there is also the co-financing option for our researchers, who wish to return from abroad to Serbia, in order to attract them to educate themselves and work here.

Peter Đurđev mentioned one of the sentences from the famous novel by George Orwell "1984", which states: "Who controls the past, controls the future," explaining that this is true because our knowledge of the past helps to create a better future. If we make an effort to learn from the past, he said, we can also use archive material in various spheres, and we will find a lot of interesting facts that will help us to improve our education.

Nikola Bozic said that the Petnica Research Center was established 33 years ago and it is oriented towards talented young people who are interested in science. At the Center young people from all over Serbia and from countries of the former Yugoslavia are gaining knowledge on various topics.

-In The last three decades through our programs over 50 thousand students passed and we are very proud of it. Our programs are implemented in cooperation with various universities and institutes, and they gather nearly two thousand junior and senior scientists from Serbian, Croatian, Bosnia and Herzegovina, Slovenia, Macedonia and Montenegro. After all these years, our "network" spreads around the world, including some of our "students" who are now working at prestigious international universities. He believes that people are very interested in reading scientific publications, but the problem is that we do not have enough journalists who are specialized for this subject. Another big problem is that our educational system is not ready for the 21st century, which is the century of knowledge and information, and these are the main things you need to pay attention to. The potential of young people in science in this region is large, and it is very important to enable these people to be "mobile", because through this kind of regional projects, they can gather to work together-added Christmas.

Andrej Fajgelj stated that he was very pleased that the Cultural Center of Novi Sad was one of the partners who have supported this seminar, because these events are the key to retaining talented young people in the region. These seminars, he added, motivate people to change something.

That is why we talk about the "brain drain", because it is not such a tragedy when the worst are leaving the country, but we will be sorry if the best and most talented leave. To prevent this, people should be given a chance to do something. If such events were more regular I think more people would remain here, or considered to come back.- said Fajgelj.

He was speaking about Novi Sad and it’s candidacy for the European Capital of Culture 2021, and he said that Novi Sad was and still is a multicultural city, which is now a very rare case in Europe. It is a rare thing to have a sustainable and multicultural city for almost three centuries and that is something that Novi Sad can offer to the European Union. Of course, he said, we still have many important and beautiful things to offer, and we are very proud of our cultural tradition. The potential that we have, he added, must be used in the right way, strengthened and used to find new solutions to some problems.

Danube international seminar connected 25 young researchers during four days, and also students of master's and doctoral studies, as well as postgraduate students from different countries of the Danube region and to highlight the many features and options in the Danube region through various workshops and lectures.